Start a Wiki
Bear Imps are creatures that reside in The Bad Place. They are found pestering the Bad Beaver by hammering nails into his head.

The Bear Imps are tiny winged creatures that appropriately resemble bears. They carry tiny hammers in which to hammer nails into the Bad Beaver's head, making him unable to torture souls as is his job. Similar to Hummingbirds and Dragonflies, they cannot be fluffed by any means.

Their role in the game is similar to the Dragonflies in Furry Forest, in that they need to be guided away from a beaver to allow progression, by activating some sort of attraction source. In the Bear Imps' case, pools of water found around the beginning area of The Bad Place act as these sources. Firing into a pool of water will ignite it, attracting a single Bear Imp away from the Bad Beaver. Repeating this process for the other pools found around the area will eventually attract all the Bear Imps, allowing the Bad Beaver to help in your progression and continue his job. 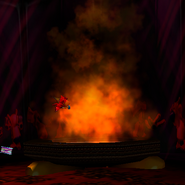 Bear Imp at a lit pool.
Add a photo to this gallery
Retrieved from "https://furfighters.fandom.com/wiki/Bear_Imp?oldid=9055"
Community content is available under CC-BY-SA unless otherwise noted.