Bungalow is a Kangaroo from Alice Springs, Australia. He is 5 years old, and his special ability is jumping higher than all the other Fur Fighters. He is married to Esmerelda. All Babies, except his own, refer to him as "Mr. Silly" in the PC and Dreamcast versions. His flea level can be found in Jungle of Despair.

Bungalow is a fully - grown male Kangaroo and best friend to Roofus the Hound.

Slow and easygoing , this massive antipode has a lot more muscle than sense. He is happiest when taking orders from others - usually Roofus or his domineering wife!

In Dinotopolis, Bungalow had to battle against his wife by shooting the caps off the surrounding inflatables. When he asked her if she was okay after saving her, she hit him, complaining about his method of rescue.

Later in The Bad Place, Bungalow had to face his own nightmare by collecting all the Gold Tokens in the area, despite his displeasure at locating them due to his intelligence.

He then had a brief moment of relief until General Viggo attacked Fur Fighter Village, after which he set off for the last struggle.

In the Secret Island, Bungalow had to duel against Mr Grr and Mr Arr, whilst making certain the bell was hit as to clear his mind of the mesmerizing music within. Finally, he is seen helping Roofus at the end of the final battle.

Being a kangaroo Bungalow has light and dark brown fur. Bungalow wears an unbuttoned red Hawaiian shirt and a pair of blue jeans. Also being the strongest and a kangaroo, Bungalow is strong and jumps very high but can't really run or walk. He can only hop to move from place to place. 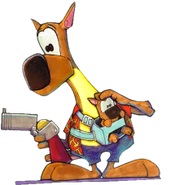