Start a Wiki
When entering Chang's Room in the Bad Place you will find Chang's Nightmare. The entire room is covered in white with invisible walls and stairs and is filled with Crocodiles. Chang will be dressed in a white Tux or his whole body- attire and all - will be white (Viggo's Revenge).

Being that all the walls are transparent, navigating the area can be somewhat tricky if you do not know where to go. Though you can see where the enemies are, they can't themselves see you until you enter the same immediate area. Their noticing your presence may also help in finding the right path. The area as a whole is small so finding the way to the exit may not take as much time as one may initially think. Using the holes made from bullets can help keep track of where the walls are, though using too many bullet holes will cause the oldest ones to disappear.

The meaning of Chang's Nightmare is referring to Chang not being noticed by the real world due to his height. 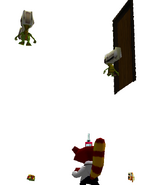 Add a photo to this gallery
Retrieved from "https://furfighters.fandom.com/wiki/Chang%27s_Nightmare?oldid=10642"
Community content is available under CC-BY-SA unless otherwise noted.