Claude is Juliette's artistic husband. Like the other spouses, he was kidnapped by General Viggo and mutated.

Before you save him, you can encounter him starring in a movie in the Quackenheim Museum. Here, he will tell you his favorite things and, if you can input them successfully in reverse order, he will reward you with the combination for the safe containing the Roquefort Diamonds in the Vault.

He is transformed to a slightly lesser degree than the other spouses, sporting an astronaut costume as he takes the battle to outerspace in Saving Claude. Since he won't answer Juliette's questions, she defeats him in battle, where he gladly responds to her, more concerned at how unfashionable his suit is. He returns to Fur Fighter Village, where he can be seen sucking his thumb back home.

He finally appears to help save Roofus from General Viggo, wielding two Cluster Bombers in (or two Rocket Launchers in Viggo's Revenge).

These are a few of my favorite things... 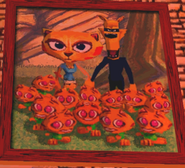