Fur Fighters (Меховые кулаки in Russia) is a video game developed by Bizarre Creations and published by Acclaim Entertainment for the Sega Dreamcast in 2000. Shortly after, it was released for PC with some minor changes and bug fixes. A year later in 2001, another updated version of this game was released on PlayStation 2 titled Fur Fighters: Viggo's Revenge which includes voice acting, cel shaded graphics, additional content and more bug fixes. After over 10 years of absence, the Fur Fighters series finally saw a new entry on iOS titled Fur Fighters: Viggo On Glass, a port of the PC version of the game.

The game tells the story of the Fur Fighters, a group of animal warriors, and their quest to save their families, and the world, from the evil General Viggo.

The story begins years in the past, when the Fur Fighters, an elite squad of highly trained Special Force cuddly animals, brought the Evil General Viggo to justice. Viggo, a giant sinister white cat with global domination in his eye, was dispatched to jail for his crimes. With their greatest foe behind bars the Fur Fighters retired to a peaceful seaside village and put their battling days behind them. Years later General Viggo returned, and with the mighty resources of Viggo Industries behind him, is once again planning conquest. In order to stop the Fur Fighters from getting in his way, he has ordered his army of stupid Bears to kidnap the hero's families. He gases Fur Fighter Village and lets the Fur Fighters live for them to suffer. After the Fur Fighters gains consciousness and find out that their family members have been kidnapped, they go after Viggo for one last time in order to save their families and defeat General Viggo for good.

The Gameplay is set up like a standard third-person shooter but uses a world populated by cute animals as its setting. In Fur Fighters it is the players job to rescue the Fur Fighter's babies, but they can only be rescued by their own parents. For example: Chang can only rescue his babies but can't rescue Rico's babies. The babies were captured by General Viggo, and scattered all over the world as seen in the opening cutscene. The gameplay featured many unique aspects for a third-person shooter for the time it was released. Most notably levels are usually extremely large, require sometimes hours of exploring to locate all of the babies and collecting all of the Gold Tokens. Tokens are a collectible object in every level to allow the player to go to future levels in the game. There are 100 of them to be found in each level. Each Fur Fighter also has their own special ability. It is often necessary to use all of the Fur Fighters in order to rescue all of the babies and collect all of the tokens. You can switch between the Fur Fighters during a level by using the Telepoints scattered throughout the game.

Roofus the Hound that was born in Glasgow, Scotland and is the leader of the Fur Fighters.

Chang the Firefox born in Hong Kong, China and is the smallest of the Fur Fighters.

Juliette the Cat, born in Paris, France and the only playable female in the game.

Bungalow the Kangaroo from Alice Springs, Australia is the Fur Fighters brawn and is also the most dim-witted.

Rico the Penguin is the only member that can swim underwater.

Tweek the Dragon is the youngest out of the Fur Fighters and the most silent.

Something unique about the game is that for almost every song, the tune changes slightly depending on which Fur Fighter you are playing as. There are also some songs heard solely in certain areas. For a full list of songs found within the game, please see Soundtrack.

Fur Fighters met with positive reviews. The game was praised of its humor, game play, graphics and attention to detail, but there was some criticism with the control scheme. However, Fur Fighters was not financially successful to take the series further. Bizarre Creations re-released Fur Fighters on the Sony PlayStation 2 under the title Fur Fighters: Viggo's Revenge. The title led an assumption that it was a sequel, but it was just an update to the original game. 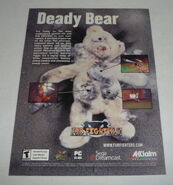 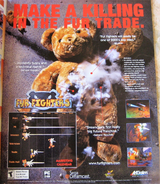 Trade Advertisment
Add a photo to this gallery
Retrieved from "https://furfighters.fandom.com/wiki/Fur_Fighters?oldid=12541"
Community content is available under CC-BY-SA unless otherwise noted.