General Bristol is a deceased Walrus general. He is the Fur Fighters mentor and spiritual advisor. He can be found in just about every level (except Flea levels and Fluffmatches), offering a hint on how to pass certain puzzles. Sometimes, he will only show up if the player constantly fails a certain task, such as a boss strategy. He is also the one who, alongside Sergeant Sternhauser, will be there to train the Fur Fighters as they progress, starting with the Undermill.

Finally, General Bristol will grant you the items necessary to proceed further into the game, such as the Subway Token after you defeat a boss.

Though being dead, the General still wears his war uniform. On his helmet contains three stars and two straps on the left and right side of his helmet. Being a walrus Bristol has tusks and flippers. Though his orignal skin color can't be really pointed out due to him being a ghost. When a ghost Bristol emits a blue glowing aura, and Bungalow once told him to glow a bit brighter in New Quack City.

General Bristol is a stern character who will hand out praise where deserved. 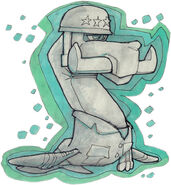