Gold Tokens are an obtainable item in the Fur Fighters world. There are 100 Tokens scattered in every regular level and 10 in each Hubworld (except for Fur Fighter Village, where 50 are obtainable). Gold Tokens are required to gain access to new levels, see Required Entry Tokens.

For every Gold Token you pick up, 2 Health Points are restored. Once a Gold Token has been obtained, re-entering the world will cause it to change into a Silver Token. Whilst they still restore HP, Silver Tokens do not count towards your overall token total.

Whilst training in the Undermill, General Bristol explains that Gold Tokens are needed to power the Telepoints, as the green teleportation slime crystallizes into the Gold Tokens. Similarly, the more you gather, the quicker resting Fur Fighters recover lost HP. 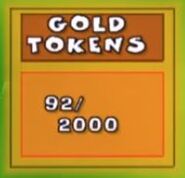 Add a photo to this gallery
Retrieved from "https://furfighters.fandom.com/wiki/Gold_Tokens?oldid=12536"
Community content is available under CC-BY-SA unless otherwise noted.