Juanita is Rico the Penguin's third wife who finally managed to reign him in from his adventurous ways and settle down to take care of their brood of chicks in Fur Fighter Village.

She is captured and mutated by General Viggo and then dropped in the central water tank at the Beaver Dam. After an immense battle, Rico manages to defeat her in Saving Juanita and returns her to normal, commenting that he had liked her with a bigger butt. She slaps him for making such a crude remark.

She then returns to the village, though mentions that she has a headache, not wishing anyone to disturb her.

Finally, she is also present in the final battle against General Viggo, where she wields two Pistols like her husband in order to help save Roofus from General Viggo. 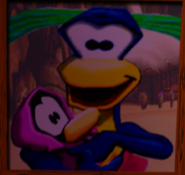 Inflatable of Juanita's Mutated form as seen in Saving Esmeralda
Community content is available under CC-BY-SA unless otherwise noted.
Advertisement