King Solomon's Fluff is one of the maps in Fluffmatch mode. It is based off of the underground ruins of Anatat Tatanatat and is the only map with no telepoints present, meaning that whatever character is chosen will stay as that.

This map can be very frustrating if someone hustles to the Freeze Gun first and uses it to dominate everyone. However, some players can counter with a Bomb Launcher if fought in a small area where the grenade can explode on the Freeze Gunner and fluff them, preventing them from using a Freeze Gun until they go back up and get another one. There is one mechanism that is often overlooked by new players - if you shoot the "picture frame" with the Viggo symbol on it, it will open a trapdoor that leads to the Bomb Launcher and Submachine Gun. There is an exit that opens when the player steps over a certain spot which opens it (it leads to the huge room with the Shotgun and Plasma Blaster). It is possible to get crushed by the trapdoor and the exit door, the former being very hard to accomplish. 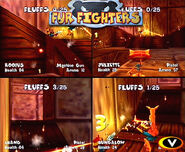 Early screenshot
Add a photo to this gallery
Retrieved from "https://furfighters.fandom.com/wiki/King_Solomon%27s_Fluff?oldid=11641"
Community content is available under CC-BY-SA unless otherwise noted.