Mai is the quiet wife of Chang.

Nothing much is said about her in the game. Like her husband, she is also small in stature, and is also a Firefox.

Upon her capture, General Viggo has her mutated and locked away in a cage. She became a quick and agile force to be reckoned with in the form of a slithery silver fox, and resided in the distant temple of Anatat Tatanatat, aka City of Fear.

Once saved by her husband, she enjoyed a brief moment of repose with the other Fur Fighters and their family before witnessing General Viggo's attack on the village. After, she remained at Chang's house. If you awaken her, she utters her only line of dialogue.

Finally, she appeared at the end of the final showdown to help save Roofus. 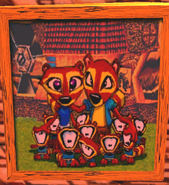 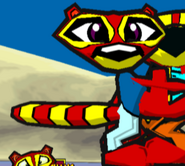