He is located on his Secret Island in Viggo's Vault, where Chang will need to defeat him in order to stop a bomb aimed for Fur Fighter Village from being detonated. Like all battles in the vault, you are given 60 seconds to defeat him.

Odebah attacks using his hand, which can cause major damage if it hits. However, his attacks are limited to Close Attacks, so you may use this to your advantage. If you are able to trap him against a cage, he can be rapidly fired upon without moving him away, making the battle surprisingly easy.

Odebah will briefly pause when about to hit, so should he catch you off guard and catch up to you, rush out of the way when he draws his hand backwards. Even with you out of the way, he will still whirl his mechanical arm around in the air, leaving you with another opportunity to attack him.

After defeating him, you can obtain Cage Key 3, and initiate the final battle in the vault. 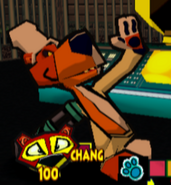 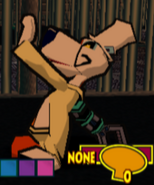