Quackerfeller Plaza is an area located in New Quack City. It is the area in which the Boss level, Saving Gwynth takes place, where Tweek must rescue his mother before she sets the whole of New Quack City alight.

The area consists of four building tops, each progressively taller, from the starting point counter-clockwise. Each building top consists of two levels. If one finds themselves on the lower level, they can access the higher ones via a lift similar to the one in the hedge maze in the World Quack Centre. Powerups and ammunition are scattered across each rooftop, on both levels. Falling off any of the buildings will result in an instant fluff. When progressing through into the boss battle, Gwynth will fly to the next building while also setting the previous building ablaze. This results in a towering inferno that will rapidly cause damage when the player is close.

If one decides to return after defeating Gwynth, the area will become repaired, with no damaging fire. To exit the level at this point, there is a passageway on the lower level of the starting building. 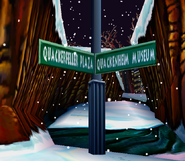 Level exit after re-entering the level.
Add a photo to this gallery
Retrieved from "https://furfighters.fandom.com/wiki/Quackerfeller_Plaza?oldid=10752"
Community content is available under CC-BY-SA unless otherwise noted.