The Roquefort Diamonds are valuable gems found in the Quackenheim Museum in New Quack City. General Viggo attempts to steal them in order to regain depleted funds for Viggo Industries. They are heavily guarded with several forms of security procedures in place.

They are originally found in the Valuables Area, though once Chang rescues Xuan, they initiate a security procedure which dumps the diamonds - and Bweek - into the Vault. 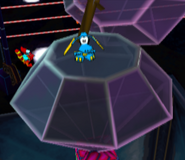 The diamond, about to disappear. 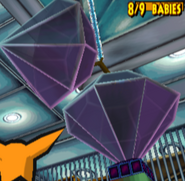 Diamonds in the vault.

Bweek awaits!
Add a photo to this gallery
Retrieved from "https://furfighters.fandom.com/wiki/Roquefort_Diamonds?oldid=10875"
Community content is available under CC-BY-SA unless otherwise noted.