Telepoints are the Fur Fighters' main method of getting around. They are connected to the Teleportation Device, but due to a lack of power, only one Fur Fighter can be teleported to an area at a time, and the others must wait behind patiently. Fur Fighters will always look towards a Telepoint, unless it's their own.

Telepoints can be found in every level of the game, and on some occasions there can be multiples of the same Telepoint. Whilst there are Telepoints in each of the levels, sometimes there may not be a Telepoint for every Fur Fighter (for example, there are no Tweek Telepoints in God Machine Valley).

When a Fur Fighter has been returned to a Telepoint, their Health Points will slowly start to recover on their own. They recover much faster when Gold Tokens have been collected. 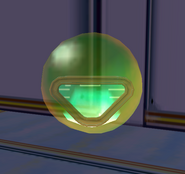 An inactive Telepoint.
Community content is available under CC-BY-SA unless otherwise noted.
Advertisement