Start a Wiki
Tweek's Nightmare is the first nightmare you explore when in The Bad Place. The goal is to get Tweek to get onto the nest of eggs in a demonic version of his home.

Tweek will start off at the bottom of a large nest, very reminiscent to his nest back in Fur Fighter Village. Armadillos patrol the outer ring, and Cows (in Viggo's Revenge) roam the inner area. In the Dreamcast version, there are bears roaming the outer ring. Unlike all other levels, falling in the surrounding lava is an instant fluff, despite Tweek's usual resistance to lava.

The objective is simple - Get to the top of the nest, and join the other eggs. To do this, you will need to move forward and jump on one of the lower platforms and make your way to the top. As simple as this may seem, some platforms will start to move as soon as Tweek lands on them, and some will bounce you high into the air. You can then glide across to the next, gradually going higher and higher.

It is recommended you destroy the enemies around here first, as they will plague you (particularly in Viggo's Revenge) otherwise. At the top, simply enter the middle of the nest, and Tweek will finally break free of his nightmare.

Tweek's nightmare represents his fear of being separated from his family at such an early age. 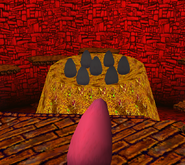 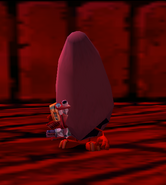 Add a photo to this gallery
Retrieved from "https://furfighters.fandom.com/wiki/Tweek%27s_Nightmare?oldid=10648"
Community content is available under CC-BY-SA unless otherwise noted.